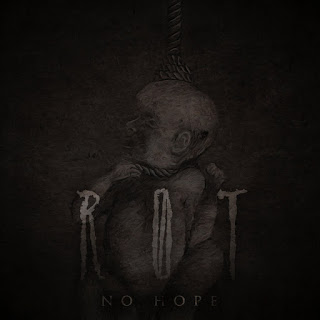 Have you ever heard an album so depressingly misanthropic and nihilistic that you question your life? Hailing from Italy, Rot provide the soundtrack to the apocalypse sounding like the bastard son of Primitive Man and Black Tongue.
No Hope opens with a track called Disillusionment and throughout the tracks 5 minute time span it gives you a taste of what you'll hear for the next 29 minutes, giving off elements of doom metal and black metal all wrapped up in a downtempo hardcore package sounding extremely unique compared to all the other bands currently attempting to pull off this sound. A lot of what you'll hear on No Hope is slow, doom filled passages with absolutely haunting melodies but when it does go into blast beat territory like in the track Pitch Black it transitions so flawlessly that you're left sitting there feeling like you just had your head caved in with an anvil. The song writing on this EP is top notch with the vocals/lyrics providing another layer in the already depressing sounding music which in itself is absolutely crushing.
Production wise this EP sounds crisp without sounding over produced thanks to the great job done by the bands mastermind Simon Pietroforte at Divergent Studios. The guitars/bass cut through the mix perfectly, the drums sound thick and brutish and the vocals sit on top of it all perfectly without ending up to high/low in the mix. If you're looking for something truly nihilistic to listen to that is full of lush, haunting melodies then look no further than No Hope.

BANDCAMP
FACEBOOK
Posted by Myspace Deathcore at 08:53 No comments: 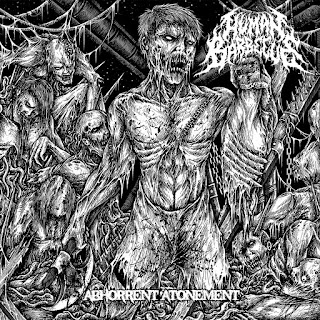 Alright so today we're looking at the new EP from Human Barbecue. Formed in 2015 by Jason Lambert from Putrified J, Human Barbecue play a brand of death metal that'll probably appeal to fans of the more brutal realm and to fans of bands like Kraanium and Acranius.
Their most recent release Abhorrent Atonement released on October 14th by Lord Of The Sick recordings features a different lineup than the Cannibalistic Flesh Harvest LP that came out earlier this year but still retains the crushing sound that they've become known for.
Opening track Babies Pancetta, starts off with some unsettling ambience before bursting into a frenzy of mosh riffs and heavy slams. On The Prowl (the albums lead single) is a pretty straight forward track opening with a slam riff then going into a groovey pinch harmonic filled riff. Up next is Disgust which might be my favorite track from the EP. The track bludgeons you for the first 50 seconds before going into a start stop type riff full of blast beats for a bit then it descends back into a brutal slam section. Finally we have the closing track Hung Then Filleted. This one is pure caveman slam style bringing about a very classic brutal death metal sound while still sounding modern without all the deathcore influences that seem to be filling the current BDM/slam scene.
Vocally Lambert is on point more than ever with his signature guttural style and the guitar tones are thick and dirty without losing any clarity. The drums (while programmed) sound top notch and cut through the mix providing the backbone to these songs.
To say this will hit my year end list would be an understatement, Human Barbecue have released two albums this year that have both ended up on heavy rotation for me so I highly recommend giving this a spin.

BANDCAMP
FACEBOOK
Posted by Myspace Deathcore at 08:31 No comments:

Email ThisBlogThis!Share to TwitterShare to FacebookShare to Pinterest
Labels: #Brutal Death Metal, #Death Metal, #Slam, #Slam Death Metal, Human Barbecue
Newer Posts Older Posts Home
Subscribe to: Posts (Atom)
Follow our new Facebook page here and help spread the word!
https://www.facebook.com/Barren-Blog-283631902450241/
Please message our facebook page for any and all submissions, emailing me personally will get you nowhere because I rarely check it and by rarely I mean never.