Debridement - Drowning In A Cesspool Of Malform And Malady 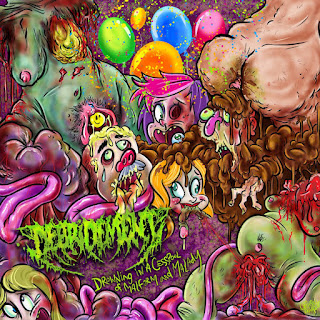 Here's one for all the goregrind/brutal death metal sicko's out there. I absolutely love bands like this, everything from the ridiculously over the top heavy music to the gross artwork/imagery used to represent the band, I fucking love it.
I guess that brings us to today's post which is the newest release from Northern Ireland's own Debridement.
Formed in 2016 by Connor Brown, Debridement play a brand of brutal death metal all their own (all his own?). I've been following this band since Vomiting Forth From The Earth was released last February and have been waiting patiently for the first full length release pretty much since the moment Vomiting was released.

Here we have Drowning In A Cesspool of Malform And Malady (which from here on out I'll just refer to as DIACOMAM because it's too much work for a lazy prick like me to type that every time) which is 10 tracks of absolute filth. The first track Adrenochrome sets the pace for the album, opening up with a sample before bringing in one of the beefiest riffs I've heard in a long time. Adrenochrome slams hard before shifting into a groove riff then descends into absolute blastbeat chaos. Track 2 (Dank Mank Stankin Skank) carries on with the beef, opening with another sample (which are found all over the album) and then opts to switch off between dank slams and unrelenting blast beats.
The change in tempos keep the album sounding varied and fresh sounding all while maintaining the unrelenting brutality brought by the meaty riffs which are equally as spastic, but are intricate and tight enough to keep you going "holy fuck". The drums here are very heavy on the double bass and while programmed (I think? I could be wrong) they manage to tie everything together flawlessly and the bass itself is thick and cuts through the mix when needed. Vocally... well I mean, look at the cover art, you know you're getting some of the thickest gutturals in the game, the guest spots from Lukas and Pumpa (Stillbirth) on Reefer Addict and Marc (Colpoclesis) on Sputum are also well placed and add to the heaviness factor.

All in all this is easily one of my favorite death metal releases this year and without a doubt Debridements best release to date. The production is crisp without sounding overproduced, the songs are well crafted and keep you hooked and the artwork provides the perfect visual representation of the music. Sick, Heavy, and Depraved.