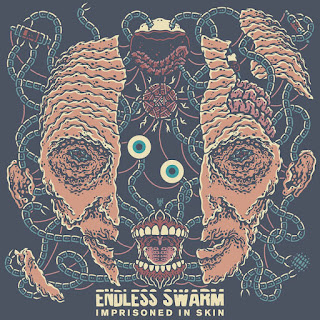 Remember when bands like Charles Bronson, Despise You, and Extortion came out and crushed any preconceived notion of what a hardcore band could do? Me neither, unfortunatly I wasn't lucky enough to be around when powerviolence bands first started popping up. I am however lucky enough to have seen bands like Spine, Weekend Nachos, and Endless Swarm release records that have continued to push the boundaries of what people think metal and hardcore are about.

Imprisoned In Skin, the debut full length from Scotland's Endless Swarm is a fresh take on an old sound. Rather than building on the foundations their previous releases have showcased, they've pushed the boundaries of not only their own sound but of the genre itself creating one of the freshest sounding grind/powerviolence albums to be released in the last ten years and production wise this is a huge step forward not only for Endless Swarm but for powerviolence itself.

Right off the bat you're met with furious blasts and intense riffing this side of a Crossed Out record. Blasting continues to carry on straight through until track four (Interpolate) where we get a brief moment where the bass shines through and trudges along. One of my favorite parts of this album was how prominent the bass was especially on Corrosive Matter where it switches off twenty seconds into the song and drops a nasty bass line.

Throughout the short duration of this album, a mere twenty minutes, you'll find buzzsaw like guitar riffs, mosh inciting breakdowns, the thickest bass tone provided by any powerviolence band I've ever heard, vocals that opt between Full Of Hell styled death grunts and a beefy hardcore shout, and blastbeats that would make Dave Witte proud. Imprisoned In Skin isn't a super complicated album but I really don't think it was meant to be, I feel like this album was just years of anger and frustration with the world manifesting itself in an aural assault.

Imprisoned In Skin releases on October 1st preorder it HERE
Follow the band HERE and try to catch them at a show
Posted by Myspace Deathcore at 14:03