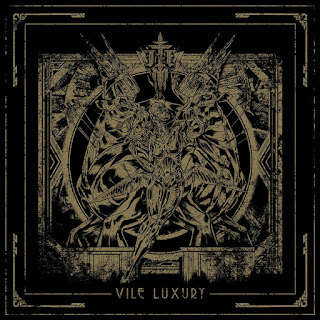 I'm going to preface this by saying if you're looking for something uplifting and happy then you are definitely in the wrong place. What Imperial Triumphant have created here is truly a bleak and desolate piece of art. Vile Luxury came out back in July and while this blog wasn't running at that point I feel it was necessary to review one of the albums I've listened to the most this year.
Hailing from New York, Imperial Triumphant play a brand of blackened death metal unlike anything you'll ever hear but to just call this a blackened death metal album would truly not do it justice. Album opener Swarming Opulence starts off with a horn section before jumping down a well of dissonance and blastbeats creating a swelling of sounds and textures that I've only heard bands such as Gorguts and Artificial Brain successfully pull off. There's sections of this album such as on Lower World an Chernobyl Blues where you think it's going to relent (and it does briefly) but there's always an underlying sense of manic chaos in the background and when they choose to bring the heaviness and chaos down to a minimum it brings almost a film score feel to it and you can almost feel the New York art scene wrapping itself around the album.
The instrumentation on this album is top notch on this outing which is not to say that previous releases were lacking but that this one has definitely set a new bar. The guitars are heavily dissonant and create a sense of dread, the drums blast throughout while stopping just enough to create new textures in the less chaotic sections, and the bass thumps and shines all over.

Overall I'd recommend this album heavily to the bands mentioned earlier (Gorguts/Artificial Brain) but I'd also recommend this album to anyone looking to explore new sounds and territories in the metal scene. Where many bands try to experiment and it comes off as sounding derivative and like a watered down version of their influences Imperial Triumphant have created something truly unique and desolate sounding.

Posted by Myspace Deathcore at 07:45