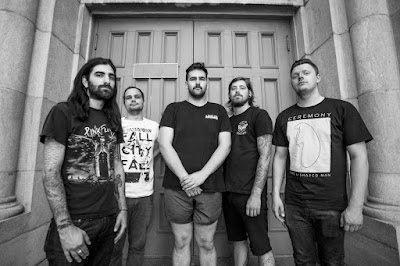 Kennedy are a hardcore band hailing from Montreal, who play a brand of hardcore so chaotic that it's difficult to listen to them without wanting to destroy your entire house. I was lucky enough to open for these guys (ya I play in a shitty hardcore band, so what) and witness first hand the chaos that ensues when these guys play. Their most recent (and first full length) album "The Guilty Poor" came out last September and contains 11 tracks that are sure to make you hate everything and want to destroy anything in your path. I highly recommend checking these guys out (newest album is killer incase I haven't mentioned it enough) and definatly check them out if they hit up a town near you because it's worth it.

Kennedy on Facebook
The Guilty Poor on Bandcamp
Posted by Myspace Deathcore at 14:28