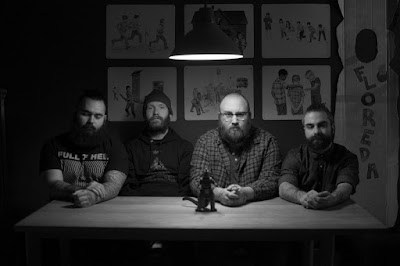 Can we just take a second and talk about Mad Trapper? From what I gather, these boys formed the band in 2012, (and) taking a que from bands like Converge and other metallic hardcore bands like Coalesce they worked on what would become their first release "Kill Us, Start Anew" fast forward to 2015, they put out their first full length, the absolutly crushing "Dead Living", played a string of headline shows and got some opening slots on some great shows local to Toronto. I firstbecame aware of them when I saw them open for Retox and Whores on their tour for Retox's "Beneath California" album, I walked into the venue a couple songs into Mad Trapper's set and saw their bass player tossing his instrument as high as possibly with little regard for those around him and their singer throwing himself around like a mad man, doing barrel rolls while yelling and screaming the words without missing a beat. Now it's 2016, they got a sweet slot opening for Decapitated, recorded some music for Converse Rubber Tracks, and are poised to take over the Canadian hardcore scene. Keep your eyes and ears on watch for these guys because there's big things coming in their future.